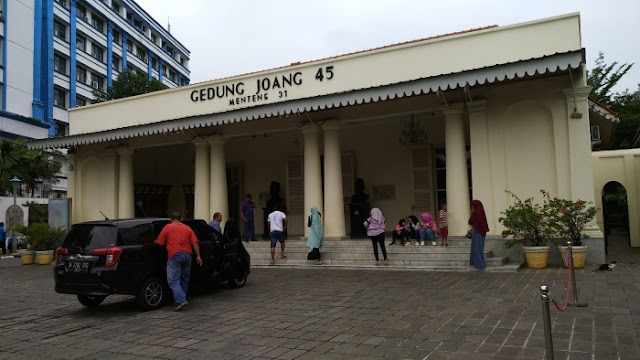 
After the proclamation of Indonesian independence was successfully announced on August 17, 1945, in this building, Komite van Aksi (the Action Committee) was formed on August 18, 1945, by dozens of youth leaders such as Adam Malik, AM Hanafi, Maruto, Chairul Saleh, Sukarni, Wilkana, Pandu Kartawiguna, Nitimihardjo, Armunanto, Djohar Nur, and Kusnaeni.
Various actions that have been successfully carried out by this committee include urging the formation of KNIP (Komite Nasional Indonesia Pusat) or the Central Indonesian National Committee, PETA (Pembela Tanah Air), and Heiho, to be made TRI (Tentara Rakyat Indonesia) or the Indonesian People's Army, including proposing the formation of several organizations such as Barisan Pemuda (the Youth Front), Barisan Buruh (the Labor Front) and Barisan Tani (the Farmer Front). Barisan Buruh then became API (Angkatan Pemuda Indonesia) or the Indonesian Youth Force. This committee also initiated Rapat Raksasa Ikada (the Giant Meeting at Ikada) which aimed to show the foreign countries that the Indonesian nation was independent and free from colonial influence. As a result of the giant meeting, a number of Menteng Youth 31 such as AM Hanafi, Dervish, DN Aidit, Manaf, Roni, Sidik, Kertapati, MH Lukman, Wahidin Nasution, and Adam Malik were arrested by Japanese soldiers.

The Main Figures of Menteng Youth 31

Although there are dozens of active youth in Menteng 31, there are at least a few names that become central figures as enshrined in the Joang 45 Museum, namely:

Chaerul Saleh is a young intellectual figure who is also the chairperson of PPPI (Perhimpunan Pelajar-Pelajar Indonesia). Together with Sukarni and AM Hanafi, Chaerul Saleh runs Asrama Angkatan Muda Indonesia (the Indonesian Youth Force Dormitory) and Komite van Aksi as deputy chairman. During the preparations for the proclamation of independence, Chaerul Saleh joined in "securing" Sukarno and Hatta to Rengasdengklok.

He also attended the meeting of the preparation of the proclamation manuscript at the residence of Admiral Maeda (now Museum Perumusan Naskah Proklamasi or the Formulation of the Proclamation Manuscript Museum). At that time, in the midst of the debate over who was suitable and entitled to sign the text of the proclamation, Chaerul Saleh loudly mentioned the names of Sukarno and Hatta as people who signed "on behalf of the Indonesian people".

During the period of Indonesian sovereignty, Chaerul Saleh became chairman of Badan Musyawarah Besar Angkatan 45 (the Large Deliberation Board of the Class of 45), then he also served as Deputy Prime Minister, and Chairperson of MPRS (Majelis Permusyawaratan Rakyat Sementara).

AM Hanafi is a young man from Bengkulu who is said to be the golden boy of Sukarno. Their first meeting occurred when Sukarno was exiled in Bengkulu during the Dutch East Indies government. Next AM Hanafi was sent to Jakarta to experience the struggle for independence. When he met Adam Malik and Sukarni, he then opened Asrama Angkatan Muda Indonesia (the Indonesian Youth Force Dormitory) at Menteng 31 Building. He also tried to persuade Sukarno so that the youths would still be allowed to stay and use Menteng 31 Building during the establishment of PUTERA (Pusat Tenaga Rakyat) which also had an office there. AM Hanafi was also involved in the "kidnapping" meeting of Sukarno and Hatta to Rengasdengklok.

After the independence of Indonesia, AM Hanafi was noted to have been the Minister of the Mobilization of People's Power during the Djuanda Cabinet and made the Menteng 31 Building its office. Later he was also a member of the DPA (Dewan Pertimbangan Agung), MPRS, Congress of the Liberation of West Irian, Partindo (Partai Indonesia), and others.

In 1963, AM Hanafi was assigned to Cuba as the Indonesian ambassador there. Ironically, he also became a political exile (persona non grata) and was unable to return to his homeland, so he and his family had to live in Paris.

Adam Malik is a small and thin young man. He was nicknamed "The Akoy" because he lived and was close to the community in Buiten Tijgerstraat (Glodok) which is an ethnic Chinese region.

During the struggle for independence, Adam Malik was the Head of the Antara News Agency which was later renamed Domei by the Japanese government. Adam Malik is also an accomplished diplomat and a powerful drafter with brilliant ideas and broad political views. It was through Adam Malik that Asrama Angkatan Baru Indonesia (the Indonesian New Force Dormitory) was formed. Through a meeting at his residence attended by radical youths such as Sukarni, Chaerul Saleh, and AM Hanafi, the Menteng 31 Building was finally captured and made the headquarters of the youth movement at that time. He also took part in naming Komite van Aksi where he thought that in the interest of the nation, the action is urgently needed and not just waiting and waiting. During a giant meeting in Ikada, he had previously succeeded in convincing Sukarno and Hatta to attend the event despite fears of clashes and bloodshed with the Japanese army.

During the New Order era, Adam Malik was appointed Minister of Trade and Minister of Foreign Affairs who was subsequently appointed as Vice President of the Republic of Indonesia.

He was a young Menteng 31 who at the time of the founding of Asrama Angkatan Baru Indonesia (the Indonesian New Force Dormitory) was appointed as general chairman. He also became the main figure in the "kidnapping" of Soekarno-Hatta to Rengasdengklok even though in the end the preparation of the proclamation manuscript was finally moved to the residence of Admiral Maeda.